Love Island Fans – The Most Loyal of Them All?

Ever been pied off by a peng sort while burning to a crisp in the Mallorcan summer sun? Me neither. But that didn’t stop me and 3 million other Love Island fans from watching the Series 4 launch back in June. Since then, it’s been one of the nation’s biggest talking points. Despite Brexit talks and the World Cup, Love Island has been dominant in conversation all summer.

It’s clear that people are aching for relief from the stress and confusion of politics and ‘bad news’. Hence the popularity of the Thai cave rescue story back in July, which celebrated a global collaborative success story when the boys were saved (If you’re curious, you can read more of our insights on alternative news reporting in our Twitter Moments blog).

But how does Love Island fit into this trend of positivity and ‘good news’? Isn’t it just another reality TV show full of soon-to-be D-list celebs?

But it turns out that watching young and attractive people navigate the world of relationships is entertaining for pretty much everyone. It appears that age, gender and class were almost irrelevant in determining likelihood to watch the show. Both my teenage brother and middle-aged mother kept up with all the recouplings and dumpings in the villa and we just wrapped up a focus group where an elderly woman was a huge fan of the show, proving Love Island’s potential audience knows no bounds.

So why is it so popular? Perhaps it has something to do with the range of contestants.

The show brings together singletons from various social backgrounds with careers spanning from bartender to glamour model and A&E doctor. This means that Love Island fans get to experience the breadth of British society… at least within the parameters of looking like a Greek god. But generally, there’s something for everyone in the villa, meaning Love Island fans can’t peel their eyes off the screen.

However, I believe that there’s another, much gloomier reason for the huge number of Love Island fans.

A constant in a world of uncertainty: Love Island helps people forget

The last few years have been marked by political turmoil and tragic events across the world, making current affairs a depressing topic for many. So it’s understandable that people want some light relief from the seemingly endless stream of negative news stories they’re hearing. Not only that, no matter what happens on the show, it always seems to have a happy ending. 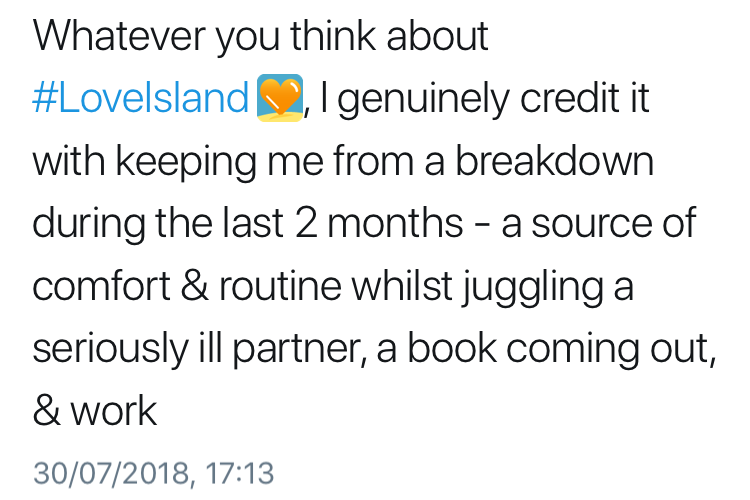 Whether it be Samira’s untimely departure or Jack and Dani’s predictable win, all the contestants managed to find their own positive resolution despite experiencing difficulties during their time in the villa. In this sense, the show almost acts as a real-life modern fairy tale. Each character’s storyline includes ups and downs but ultimately they all get their happily-ever-after.

So what can we learn about consumers from their fascination with Love Island?

The media and entertainment industries have been awash with serious, troubling stories in the past few years. We’ve had the #MeToo movement, the Facebook-Cambridge Analytica scandal and advertisers boycotting YouTube for displaying their ads beside extremist content.

So, naturally, people want a break from the negativity they are exposed to in public life. Love Island acts as the perfect antidote to this trend.

Everyone is searching for joyful, light moments in a time of darkness and difficulty. To capture consumers’ attentions, can brands tap into this optimism?

Love Island may be gone for another year, but the sense of continuity and light-hearted fun it brought to viewers around the country don’t have to go too.

Want to read more of Hook’s TV insights? Check out our blog on What We Can’t Learn From Netflix. And don’t forget to sign up to the Hook newsletter and to follow our updates on LinkedIn and Twitter!

The Fortnite Phenomenon: From Zero to Tier 100 in 70 days

The Fortnite Phenomenon: From Zero to Tier 100 in 70 days