It’s such a lovely feeling to have a chat with someone who is so thoughtful and reflective when it comes to their industry. And that’s certainly the case in this week’s interview with Jess Anson, a Founder of PodUK – ‘The UK’s podcasting fan convention’.

I reached out to Jess specifically to pick her brains about ‘fandoms’: to hear her thoughts on how to support passionate groups of media consumers and if she thought there were any differences between podcast fans and those of other media types. As you’ll see, however, our conversation ended up exploring a few different, fascinating areas.

Whether you’re interested in podcasts (and podcast listeners), building passionate communities around brands or products, or just looking for new ways to promote inclusivity and representation in media, I think there’s something in here for you…

Hook Research: Can you tell me a bit more about Pod UK?

Jess Anson: PodUK is, at its core, a group of fans creating a community hub for other fans.

The PodUK team is me, Bret Maskill-Watts & Chris Malowany, and we all met in 2017 through an online group for UK-based fans of the McElroy brothers (My Brother, My Brother & Me; The Adventure Zone).

What we realised was that although the podcasting industry is growing fairly quickly in the UK at the moment, and there are lots of events popping up across the country dedicated to it, there were none that had that ‘comic con’ feel, where fans could gather together and celebrate their favourite podcast creators together with like-minded people.

We also have a heavy focus on indie podcasters who build themselves from the ground up; who don’t have corporate funding or backing; who might not have a recording studio and instead record under a blanket in their living room, but have still built themselves a following through the strength of their creations alone.

Our attendees are – and this isn’t an entirely biased opinion, since I always hear it from the venue representatives and volunteers we work with! – some of the kindest, most considerate I’ve seen at any event, and I’d put a lot of that down to those reasons.

HR: You speak a lot about attracting ‘fandoms’ on your site. In your opinion, are podcast fandoms different from other fandoms? What drives podcast fanatacism?

JA: Just off the top of my head, the podcasts I can think of with large fandoms are The Adventure Zone, The Magnus Archives, King Falls AM, Wolf 359, The Penumbra Podcast, Welcome to Night Vale & The Bright Sessions.

If there’s one thing that ties all these names together, it’s that they’re audio dramas with fantastic storytelling.

Good storytelling, told to the right people, is a guarantee of community and fandom – just look at Doctor Who; Supernatural; Marvel; Star Wars. Some of the biggest fandoms in the world.

“So what sets podcast fandoms aside? There are a few things, but I would put it down primarily to inclusivity”

So what sets podcast fandoms aside? There are a few things, but I would put it down primarily to inclusivity.

Podcasting has a huge advantage over other media: since its creators don’t have to jump through corporate hoops to reach their audience, it can be as diverse & representative as it wants. And it goes hard.

The LGBTQIA+ community, for example, has been begging for representation like podcasting provides for years, and until now have had to clutch onto the hints of, say, gay relationships or trans characters that mainstream media offers in mere breadcrumbs (and often, let’s face it, does not offer very well).

The same goes for ethnicity: there’s a huge range of PoC-representative & PoC-created podcasting content that, again, you just wouldn’t see the likes of in mainstream media.

The podcast medium allows creators to take their representation into their own hands and share it with the world. There’s a huge amount of power in that. (Ed Note: If you’re interested in this topic, you may want to check out our conversations with Renay Richardson of Broccoli Content and YouTuber Olly Pike)

It’s a joyous thing, too, to be offered so much representation, and not only that, but in podcasting it’s often created by people of those ethnicities, orientations or genders. Giving these already passionate communities the representation they deserve, combined with stellar storytelling, is a surefire method of creating devoted fandoms.

Non-fiction fandoms exist as well, just like you have fandoms for Youtube personalities, but when it comes to the truly passionate, ride-or-die fandoms, from my experience you’ll generally find them behind storytelling.

HR: What do you think attracts podcast fans to a convention like PodUK? Has this changed between 2019 and 2020?

JA: First and foremost we try to bring in a line-up of performers who have already built themselves a fandom community. In many cases these communities will be online-only, so we can offer up a space for them to come together in real life, sometimes for the first time, and not only meet other fans but the creators as well.

At PodUK in February the King Falls AM fandom came out in droves to not only meet the creators of the podcast, but to meet their online fandom friends. We had fans of The Amelia Project, Flintlocks & Fireballs, NoSleep and more come together and meet for the first time. It’s so wonderful to see, and this passion creates a brilliant atmosphere at the event itself.

As a big change from 2019 to 2020, we introduced what we call the ‘Podcaster’s Promenade’, a play on ‘artist’s alleys’ you find at comic cons.

We let podcasters hire out a table for the day where they could promote their podcast to attendees. The tables turned out to be very popular, and were a great way for us to have more podcasters be a part of the event even if they couldn’t be on the main lineup. It also meant that those podcasters had something tangible to promote, and provided a space of their own for fans of their podcast to gather together.

We run on an ethos of inclusivity – as an example, we encouraged people to write their pronouns on their lanyard cards this year. Going one step further, one of our podcast guests brought in stickers with either she/her, he/him or they/them printed on. They went within the hour!

Even small means of increasing inclusivity and making people feel safe and seen at an event can make a huge difference in whether someone becomes a returning attendee or not. 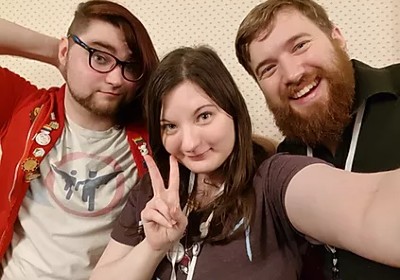 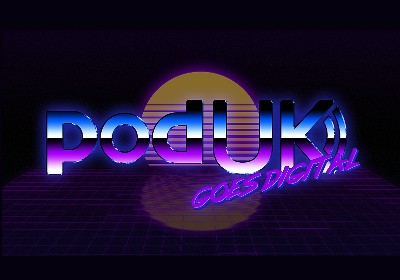 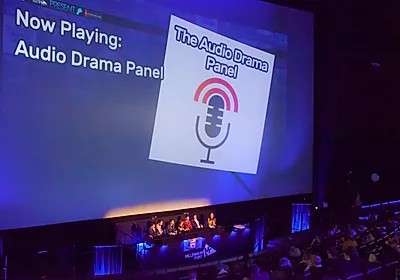 HR: Were there any big themes that emerged from this year’s convention?

JA: Collaboration. The indie podcasting community truly sets itself apart in how it interacts.

I come from a background of gigantic comic cons held at the likes of the Excel Centre where you’re constantly surrounded by what can be an intimidating sea of people, and of TV show-based conventions, where the talent is carted from room to room by bodyguards and you have to pay hundreds just to interact with them for a few seconds. It can all end up feeling a bit impersonal.

PodUK, on the other hand, lets podcasts with huge followings like King Falls AM share the same space as their fans and smaller podcasters with no barriers; there’s no additional paywalls. It’s a place where those with industry experience or an established following jump at the chance to teach those who are just starting up, entirely for free.

“Good storytelling, told to the right people, is a guarantee of community and fandom”

We have had people come to PodUK one year as a podcasting fan, and attend the next with their own fully-fledged podcast to show off as a result of the people they met and advice they received at the previous event.

It’s a kind space, and I hope that continues.

HR: What have been the biggest challenges for putting on a virtual convention? Were there any surprise silver linings to running the event in this way?

JA: It was fairly light on the challenges when compared to creating a full-on, in-person event!

If anything, we challenged ourselves by allowing for just over a month to plan and prepare the whole thing. It seems a lot of virtual events are happening that way; we did it because we wanted to put on an event for people who were stuck in lockdown or self-isolation, so the quicker the better.

It’s entirely doable because there’s so much you don’t have to think about when it comes to planning a virtual event, but because of that short time-span to complete everything, we had a few down-to-the-wire confirmations that made me a bit nervous!

The silver lining is that we got to forget all about associated event costs: there was no travel, accommodation or catering to worry about. That meant we could include a lot more US-based podcasters, some of whom we might never get the chance to work with otherwise. That was fantastic.

HR: I’ve been speaking with lots of conference founders over the past few weeks, and one of the biggest issues they’ve found when organising events like these is the absence of spaces for spontaneous encounters and networking. Is this something you thought about when putting on this year’s conference?

JA: It’s true, a digital convention can never compare to a real life one for a whole list of reasons, and that’s one of them.

We tried a couple of methods using the chat platform Discord, which incidentally is where we held the entirety of the event from. It’s a really versatile platform with some fantastic options that can add to that ‘convention’ feel. We have a dedicated PodUK chat server already, so we added a few different channels in there to simulate rooms at a convention, and we held workshops in Discord as opposed to simply streaming them alongside the livestream, to give a feel of different spaces like you would get at an in-person event.

I think if we did another virtual event, particularly a ticketed one, we would do more with that general concept.

There’s a lot of potential that we didn’t really tap into this time around. If we ever did a full-on, digital PodUK equivalent – paid tickets, a full day’s lineup of panels, workshops & liveshows, etc – I imagine we’d build an entire framework around Discord (or other platforms) to more accurately mimic that convention feel. (Ed Note: For another perspective on digital conferences, check out our interview with the founder of The Social Distancing Festival, Nick Green).

HR: What’s next for Pod UK?

JA: In an ideal world, we would already have announced PodUK 2021 and made headway toward building a great line-up.

Of course, things are far from ideal right now. PodUK events happen in February, and as of right now it’s impossible to say if things will be anywhere near safe enough to run a whole in-person event by February 2021.

But on a more macro scale, mostly we want to keep gradually growing PodUK while still keeping its intrinsic community feel. We’re looking forward to collaborating with the podcasting community much more in the future!

Thanks again to Jess for taking the time to share her thoughts with us – you can learn more about PodUK by visiting their website. Also, if you enjoyed this blog, be sure to sign up for our monthly newsletters so that you don’t miss any more great interviews like this one!

Covid & the Consumer: Clothes Shopping and Self-Care In a Pandemic

Covid & the Consumer: Clothes Shopping and Self-Care In a Pandemic